Thoughts on Ads - fleeing to Mars is morally wrong 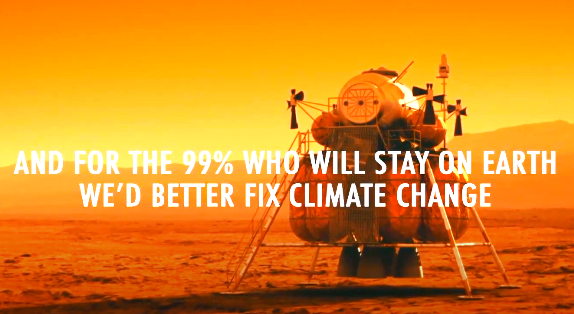 I'm not a great tree-hugger.

I keep my small corner of the universe as ecologically tidy as I can, grind my teeth at news of yet another extinct species and I'm pretty sure a Greenpeace sub still leaves my current account each year.

The more climate-change summits (aka Down the Road Can-Kicking Contests) I live through, however, the more convinced I become that the planet is already screwed.

In light of which, it has to be a really good environmental ad if it's to have any chance of grabbing my attention.

And this one does. It's a nice change of angle on the save-our-planet theme from Greta Thunberg's Fridays for Future organisation and I believe there are lessons in history that would lend real legs to the idea, were they to take it forward.

You see, we've been here already. John Buntin's book, LA Noir, tells the story of the childishly naive hope (and woeful racism) that inspired the birth of modern Los Angeles over 100 years ago...

"Other cities were based on geographical virtues—a splendid port...an important river...a magnificent lake...But nothing about the arid basin of Los Angeles (other than its mild weather) suggested the site of a great metropolis. So the men who built Los Angeles decided to advertise a different kind of virtue: moral and racial purity. Los Angeles, a settlement founded in 1781 as a Spanish pueblo, was reenvisioned as “the white spot of America,” a place where native-born, white Protestants could enjoy “the magic of outdoors inviting always… trees in blossom throughout the year, flowers in bloom all the time” as well as “mystery, romance, charm, splendor,” all safe among others of their kind. It was an image relentlessly promoted...and it worked. By 1920, Los Angeles had surpassed San Francisco to become the largest city in the west. There was just one problem with this picture of Anglo-Saxon virtue. It wasn’t true. Far from being a paragon of virtue, by the early 1920s, Los Angeles had become a Shangri-la of vice."

Putting aside the question of how much vice you can get up to in a space-suit, do any of us doubt that human nature would eventually drag a newly-colonised Mars in the same direction?

Then there's a more personal history, common to many of us (or maybe it was just my parents) that would similarly resonate against the whole idea of escaping the scene of our crimes.

I'm envisaging a follow-up poster ad, its image of Mars similar to this one, but with Earth visible over the horizon (given the distance involved. a little poetic licence would be needed with the size of the Earth, but I think the point being made warrants it.)

'"No, you're not getting a new toy," our parents told us. "You should have looked after the old one."

For most of us, this still applies. We'd better fix climate change.'