Thoughts on Ads - Go easy with the hard sell 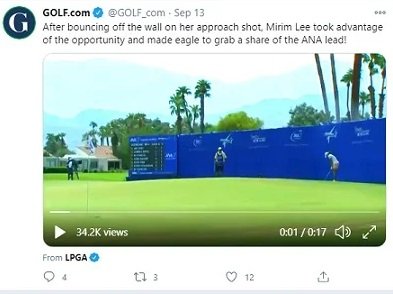 Golf is one of those Marmite sports. Loved and hated in equal measure.

I suspect golfers still breathe a sigh of relief that comedian George Carlin left us before his ideas on developing the game caught on. (Swear-box manufacturers, on the other hand, still miss him dearly - do steer clear of the link if the usual four-letter suspects offend).

Marketing ideas, however, arise in all sorts of places, so we have to take them where we find them…

At a recent golf tournament in California, sponsors ANA were offered extra exposure in the form of a giant ad hoarding behind the 18th green.

It took the form of a blue ‘wall’ that extended the full length of the green and if ANA were relying on the tournament organisers – actual golf people - to let them know if it was ‘doable’, they were poorly advised.

What would have looked right at home at a Formula One track was a monstrosity on a golf course, but ANA’s PR disaster was just heating up.

The green at that 18th hole is situated on a small island, which normally gives golfers a choice. They can gamble, go for the green from long range and have the chance of a great score.

Or they can play safe, land their ball short of the water, gently pitch onto the green with their next shot, and make a good or acceptable score.

Professional golfers are not stupid. Once they saw that wall at the back of the 18th green, they knew that any risk of overshooting into the water with their second shot had gone.

The suggestion that there is no such thing as bad publicity was about to be sorely tested.

That was just the printable feedback. If you work in ANA’s sponsorship department, the whole tournament must have felt like setting fire to hundred-dollar bills.

Whoever signed off on the wall, it goes down as another caution against marketing overkill.

For all that people grumble about advertising, we don't mind it really.

There was a time we'd be looking for the year's first snow as December approached. Nowadays, we look for the John Lewis commercial.

When done well and with wit, advertising is an enjoyable part of popular culture.

But acceptance comes with a single string attached. Don’t lay it on with a trowel.